A gorgeous little dwarf tarantula with plenty of attitude!

I was first introduced to this amazing little species by a Viper69, a member of the Arachnoboards forum. I was on the lookout for new and beautiful tarantulas to add to my growing collection, and Viper69 was kind enough to send me pics of his own Hapalopus sp. Colombia large (tarantula enthusiasts love to spread their addiction!). I was immediately floored by the appearance of this unique T. As orange is one of my favorite colors, I was enamored by the bright orange abdominal markings that lend this animal its common name of “Pumpkin Patch”. The fact that they were known to be hearty captives with huge appetites and fast growth rates made this “pygmy” species jump up to the top of my wish list. 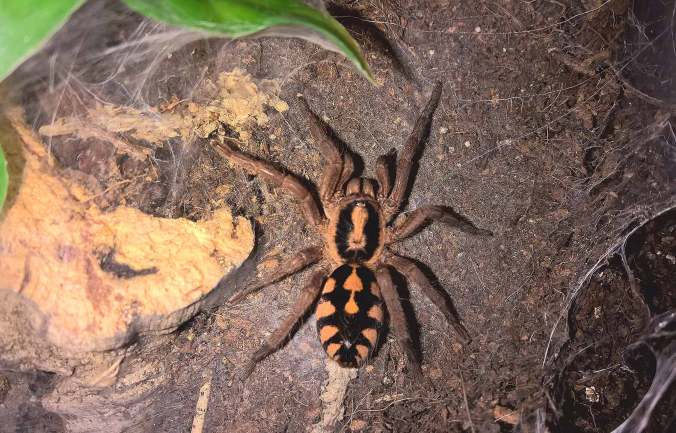 Well, several months ago, I finally procured a trio these feisty little spiders from Autumn’s Eight-Legged Experience. I was amazed to discover that, even in the sling stage, these little guys already sported their adult coloration. I’ve been used to slings that look MUCH different from their adult counterparts, so this was definitely a unique trait and a wonderful surprise. 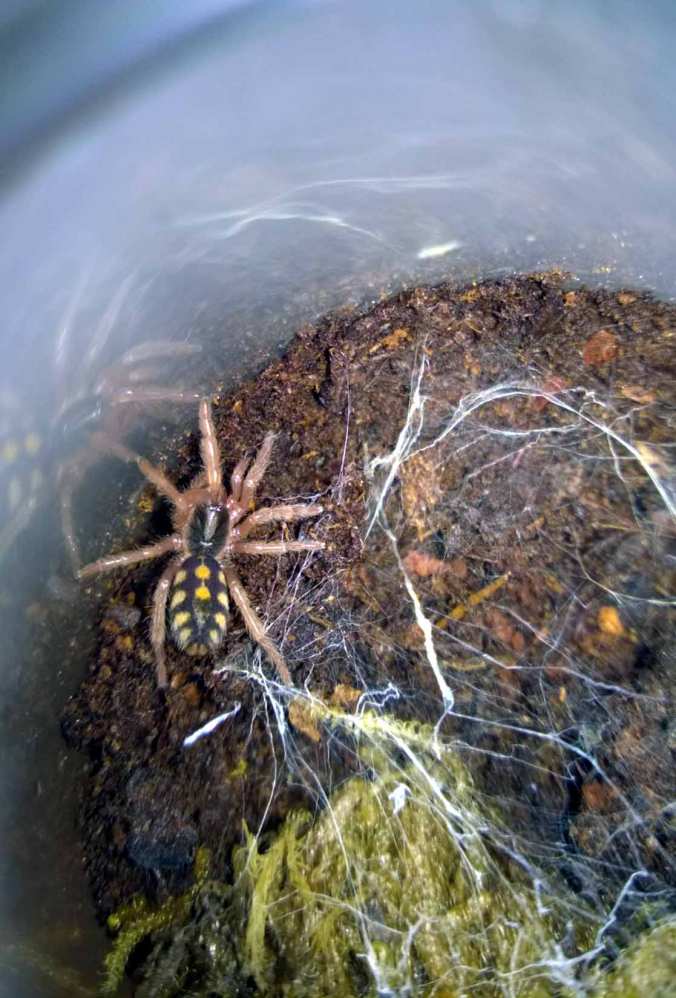 One of my three Hapalopus sp. Columbia large slings.

As my slings started at about 3/8″ long, I housed these guys in 30 dram bottles with tiny ventilation holes poked into the top with a small needle. This is a species that requires a bit of extra moisture, so for substrate, I used a mixture of moist (not wet) coco fiber mixed with peat moss. For added moisture retention—and to supply a place to hide—I also added a pinch of sphagnum moss. Using the handle of a paintbrush, I also created little starter burrows down the side of each enclosure.

These little guys were quick to settle in, adopting the pre-dug burrows while webbing up the entrances. Within days, all three had dug extensive underground burrows, and two had begun webbing on the surface. Unlike some of my “pet hole” species, as slings these guys usually bolted out of their dens and into the open whenever their enclosures were disturbed. They are quite bold for little spiders.

Check out my husbandry video for this species below!

As young adults, all three are currently kept in ½ gallon enclosures made from repurposed Sterilite plastic storage bins. Although they were given several inches of moist substrate and cork bark burrows, they used their webbing and some sphagnum moss to create their own homes. All have water bowls, and I moisten down the substrate once a month or so by simulating rain with a make-shift watering bottle. 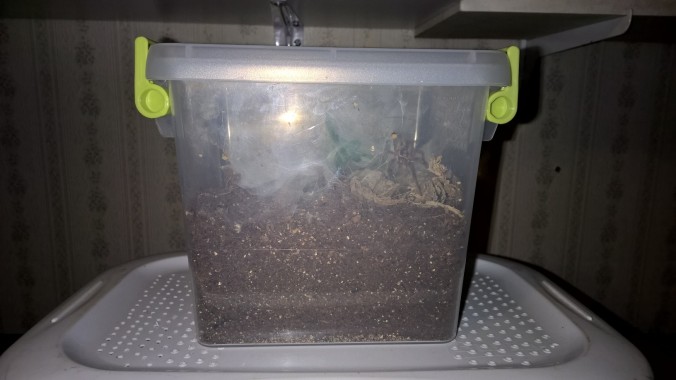 Hapalopus sp. Columbia Large young adult enclosure. This one is about 1/2 gallon.

All three have webbed up their enclosures heavily. They are not particularly shy, and they have no problem sitting right out in the open waiting for prey. This is particularly nice, because this is a truly unique and beautiful tarantula. Haplalopus sp. Colombia is a very fast and skittish species, though, and they will bolt to their dens when disturbed. Care should be shown every time their enclosure is opened for feeding or maintenance.

When I first acquired my slings, they were still too tiny to take down small crickets, I cut two crickets in half and dropped in the smaller pieces for them to scavenge feed on. All three greedily accepted their pre-killed meals. To date, they have proven to be voracious eaters, only refusing meals when in pre-molt. Once they reached about 1/2″ in size, they were able to easily take down a small cricket on their own.

Kept between 70-76 degrees during the winter and 75-80 degrees during the summer, and fed two times a week, they grew quite quickly. During the first six months,  they molted about every month and a half.  In 11 months, they’ve grown from 3/8″ to about 2.25″.

I currently feed each of my sub-adults one medium cricket twice a week. When in premolt, they will stop eating and generally become more reclusive, hiding out in their dens and staying out of sight.

Males mature quickly, with mine hooking out at about 11 months at about 2.25″. Females will live longer, reaching a max size of about 3.5-4″. There is a smaller “dwarf” version of this species that reaches a max size of about 2″, but the Colombia Large is not quite small enough to be a true dwarf.

A stunning species for the keeper used to fasts ‘n feisty Ts.

Hapalopus sp. Colombia may be a small species, but what they lack in size, they make up for in attitude and personality. H. sp. larges are generally recognized as being fast and defensive, with many keepers also branding them as escape artists that will make a mad dash for any opening. Mine have actually proven to be quite well behaved, choosing to retreat to their burrows rather than try to escape.

Although this species is a bit high-strung, none of mine have shown any aggression. I do think that a beginner with some experience could keep this species if she/he is cognizant about their speed and care. They are very hardy, and their great appetites and quick growth rate make them an ideal species to raise from sling to adult.