Feels Just Like a Bee Sting…If the Bee was 7″ Long!

When I decided that I was going to acquire some new tarantulas after keeping a G. porteri for many years, I started researching some of the other species that were now available. Although I remembered that, back in the 90s, there were some feisty and defensive species available that were very quick to bite, I also recalled many books and dealers saying that a tarantula bite was “no worse than a bee sting.” As legend had it, these giant spiders actually had very mild venom, and bites were described as no more than painful inconveniences.

I had always secretly wondered about the accuracy of this statement even as I naively regurgitated it to family and friends who asked about tarantula bites. After all, there were just so many species available; surely one of these had more potent venom than the others? Still, the internet was still in its infancy at that time, and accurate information on tarantulas was a bit more difficult to come by.

Years later, as I prepared to bring more of these creatures into my home, a home I share with my wife, four kids, and three dogs, I decided to research this theory. After all, I didn’t want to endanger my family and beloved pets due to laziness and ignorance. It didn’t take me more than five minutes into a Google search to realize that this statement was far from true.

Sure, a bite from a small New World species could probably be compared to a painful bee or hornet sting, albeit one that could sting with two stingers at once. However, this statement COMPLETELY fails to take into account three very important points:

Those are three VERY important points, and three that no hobbyist, whether new or established, should ever forget.

Downplaying bites in an effort to protect the hobby.

Recently I’ve come across some social media posts in which keepers are bragging about taking bites from their pet tarantulas. In a couple of these incidents, the keeper was on an alcohol-fueled quest to demonstrate his supposed masculinity by handling a defensive T. I’m not going to address these instances of unadulterated jack-assery  (although it may be fun to call out some of these brain-dead adrenaline junkies in another post!).

Instead, I’d like to focus on a couple folks that made careless keeper mistakes and paid with painful bites. In both of these instances, the keepers took photos of their injuries and downplayed the seriousness of the bites. And, in both instances, the keepers assured anyone reading that tarantula bites were “harmless” and not much more painful than bee stings.

Now, I appreciate that the keepers didn’t sensationalize the bites in a way that made them seem worse than they were. And, as both were bitten by New World species, I’d imagine the pain from the venom wasn’t particularly bad. However, anyone not familiar with tarantulas would read that statement to mean all tarantula species’ bites are that mild.

And that is just not the case.

I definitely applaud anyone who makes a point to show that tarantulas are not as scary as most people make them out to be, and I agree completely that they do not deserve their reputation as dangerous little monsters. However, I do think that one must be educated about their bites, the varying potency of venom between species, and the consequences one could face if he or she is bitten.

Therefore, a little more explanation is needed about their bites (and the potential harm they can cause).

Species from the Western Hemisphere (North and South America and the Caribbean islands) are referred to as “New World” tarantulas. These tarantulas have evolved to have “urticating hairs”, or barbed, highly irritating “hairs” that they can kick from their abdomens in way of defense. As a result, these species of tarantulas do not need particularly potent venom to defend themselves. Don’t be mistaken, these spiders can and will bite if provoked. It’s just their venom won’t cause much more than localized pain and swelling.

All of the more tractable and beginner-friendly species, like G. porteri, B. albopilosum, G. puchripes, and G. pulchra are all New World tarantulas, and these species, consequently, are the ones most handled in the hobby. Generally speaking, when one gets bit by one of these species, the victim suffers little more than pain, swelling and bleeding, and they usually describe the injury as mild.

In this case, the “bee sting” analogy would probably work. Unfortunately, that statement paints a VERY incomplete picture. Let’s take a more in-depth look at those three points every tarantula keeper should be aware of:

1. The size of the tarantula sometimes matters more than venom potency.

I was once reading a message board post in which the owner of a 8″ T. stirmi asked how potent the venom of that species was just in case he got bit. I had to snicker a bit, as this poor chap was overlooking a very important fact: a T. stirmi that size has at least 3/4″ fangs. Venom aside, fangs that large could do massive physical damage to a finger, hand, or any part of the body. 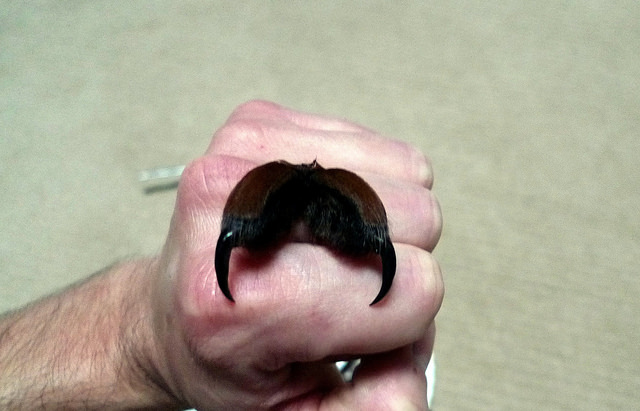 Sure, the venom itself might not do more than sting a bit, but those two large puncture wounds are sure going to smart. And just imagine if one of those fangs were to hit a tendon; now you’re looking at a serious injury that would likely involve surgery.

Again, this does NOT happen often, but it’s something that should be considered when working with large New World species like G. pulchripes and A. geniculata or some of the larger genera like Phormictopus and Pamphobeteus. Potent venom or not, a bite from a larger, full-grown tarantula is going to be a very unpleasant experience and would definitely cause more damage than a simple bee sting.

2. There is always risk of infection

A bite from a tarantula essentially leaves one or two puncture wounds, and this type of injury is much more prone to infection. With a puncture wound, foreign contaminants and bacteria are driven deep into the flesh. Although the wound may not bleed much and may heal quickly on the surface, the superficial healing only traps the contaminants inside the wound, allowing them to fester. The depth of the wound and the type of foreign bodies on the object that caused the injury can both affect the chance of infection.

Now, just take a moment to picture your favorite tarantula feasting on one of those dirty crickets. Heck, just take a moment to consider the environment it lives in. Whether you use cocofiber, peat, or just plain dirt, you would hardly be able to describe your T’s enclosure as a sterile environment. As much as you try to keep that enclosure clean, your T’s cage is harboring unseen traces of fecal matter and decaying organic material. And you can bet those fangs are covered with things you would not want injected into your body.

It’s often stated that there are no records in modern times of a human dying from the venomous bite of a tarantula. Do a search, and you’ll find that, for the most part, this quite true. However, there are few reports of individuals dying, not from the venom, but from complications from the bites. In one instance in the late 19th century, an individual bitten by an Old World species of tarantula succumbed to gangrene after the wound became infected. In another report from 1901, a farmer bitten by a large spider described as a “tarantula” eventually died from blood poisoning.

Although these instances are dated and obviously quite rare, and proper medical attention should prevent a fatal outcome, a serious infection, especially from an untreated wound, is a realistic possibility.

3. Old Word species pack a wallop of a bite that can be both excruciating and debilitating.

Old World species (tarantulas from Asia, Africa, India, Australia, etc.) are known for having MUCH more potent venom that is often referred to as “medically significant.” Unlike their New World counterparts, these species rely on their venom as a defense mechanism, and they are very willing to bite to protect themselves. Some species are also known to bite repeatedly, leaving several wounds and pumping in even more venom.

Although this venom won’t kill you, the effects can be brutal and in some cases, can last for months. The “fun” starts with immediate localized pain that some have described as a 10/10; that pain then works its way up the extremity, affecting more of the body. Those who have sought medical treatment for this pain say that nothing prescribed touches it. Then there can be the other “fun” symptoms, including:

So, you won’t die from the bite, but you could be visiting a hospital and you WILL be completely miserable. Even worse, some folks report that symptoms like cramping and dizziness can last for days or, in the worst cases, months. For first-hand accounts of tarantula bites, check out the Bite Report section of Arachnoboards.

Old word species commonly available in the hobby that are known to pack potent bites are the P. murinus (OBT) or any “baboon” tarantula, H. maculata, H. lividum, H. gigas, any Poecilotheria species, and L, violaceopes. These species are all fast, defensive and, in most cases, not afraid to bite.

I’ve also heard some folks (mainly younger males) state that they are “prepared” for a bite from an Old World and are not afraid to get bitten. Well, take a look at the video below posted by Tarantulaguy1976 (and when you’re done, check out the rest of his amazing tarantula videos!). Rob C is an experienced keeper and a big, bad dude. Observing him as he describes his symptoms from a 10″ Poecilotheria ornata bite should convince anyone of just how severe an Old World bite can be.

As always, education is the key.

As a tarantula enthusiast, I do want people to realize that tarantulas are not the monsters they are often portrayed as. Can a tarantula kill you with the venom in its bite? No. However, I also think that the myth that all tarantula bites are “no worse than a bee sting” needs to be put to rest. It all depends on the species and the size of a specimen, and even a bite from a New Word species has the potential for more serious consequences not directly caused by venom toxicity.

These are wonderful animals and fascinating pets for informed and respectful keepers. That said, they are also wild, untamable animals that need to be respected and not trifled with. A responsible keeper will not only familiarize herself with the the consequences of a bite, but will also be sure to educate any family or friends who may come into contact with these animals.

5 thoughts on “A Word about Tarantula Bites”