It’s probably one of the most common, yet stressful, scenarios for a new tarantula keeper. After months of research and homework, you purchase your first tarantula sling. Your anxiety level is high as you are new to the hobby, and despite all the preparation, you are still worried that you will make a husbandry mistake. You set up what you think is the perfect enclosure, rehouse your new little guy without incident, and take a moment to admire your new pet. Satisfied that you’ve done everything right, you head off to bed.

However, when you awake the next morning and check on your T, you find the enclosure empty … or at least it first appears to be empty. Closer examination reveals that your little guy has been busy, and he has now burrowed deep beneath the substrate. Not finding any hole or passageway, no way for your spider to resurface again, you begin to freak out. You did your research, and you read that this species is terrestrial, not fossorial …  why has it buried itself? Fearing for your new acquisition’s safety, questions swirl through your brain.

Is he in danger?

Should I dig him out?

In most instances, the answer to all of these questions is a resounding NO.

But what should I do?

And the short answer to this oft-asked question is: Do NOTHING.

Burrowing is normal behavior with many species of slings, including some arboreals.

Although this is a topic I’ve touched upon in a few different blogs, the question is asked often enough that I felt it deserved its own topic. After all, if you begin keeping tarantulas as a hobby, you are likely to experience this behavior at some point or another. 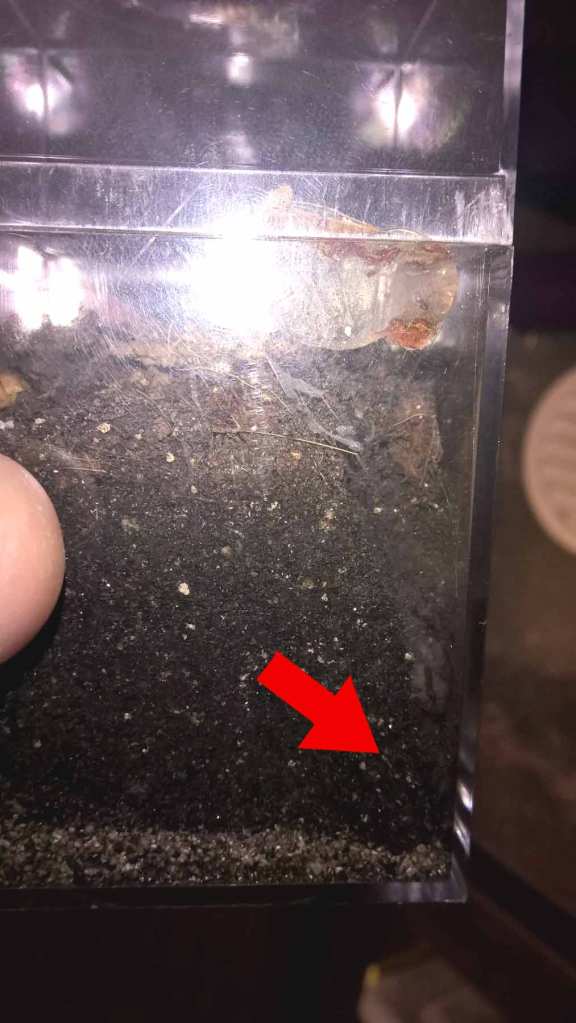 One of my P. sazimai slings sealed in its burrow. I’m expecting a molt from this one soon.

When I first got heavy into the hobby, I experienced this scenario with my L. parahybana sling. After a couple weeks of it sitting out in the open, greedily snatching prey and using a piece of cork bark for a hide, I awoke one morning to find that it had buried itself. Now, at first I didn’t panic because I could see the little webbed-over hole that marked the mouth of its den. However, when I discovered that this hole had been filled in a couple days later, panic set in. As weeks passed, I became thoroughly convinced that my little guy had buried himself alive. He wasn’t visible, he wasn’t eating, and the tunnel looked as if it might have collapsed. I was ready to dig him up to “save” him when I decided to first do a bit of research first.

It was a good thing I did, too.

I discovered that it is perfectly natural behavior for slings to bury themselves. Because we are keeping these animals as “pets”,  behaviors that are perfectly normal and essential for a wild spider’s survival can seem perplexing in captivity. Although a T burying itself seems like a dire sign to us, it is in fact very normal.

My little LP opened its burrow again after a few weeks, and although I never saw it out, the prey I dropped in soon disappeared. It lived like this, hidden in its hole, for another year before finally growing large enough to feel confident living outside of its burrow. It’s been out in the open ever since.

1. Tarantulas bury themselves for security. Tarantula slings are especially vulnerable in the wild. As a result, it behooves them to stay out of sight where larger predators like birds can easily gobble them up, or where they could easily dehydrate beneath the sun’s heat. In the wild, a sling’s burrow protects it from predators and the elements and provides it a safe home-base from which to hunt when night comes.

Sure, we keep the temperatures optimal in their enclosures, and there are not threats from predators in the safety of our homes, but they don’t know that. Their evolutionary programming is telling them that they need to burrow for security.

This behavior isn’t limited to only terrestrial Ts, either. I keep several arboreals, including eight species of Poecilotheria and L. violoceopes, and all have burrowed as slings. I could see this causing a bit of stress for a keeper expecting these spiders to be up on a branch or piece of cork bark.

2. Many tarantulas will bury themselves during the molt process. Even larger specimens may disappear into burrows when it comes time for a shed. Again, it comes down to the tarantula feeling safe and secure. The molting process is incredibly taxing and leaves the spider exhausted and very vulnerable. Not only is the spider physically taxed, but its new fangs and exoskeleton are soft and need time to harden. Therefore, many Ts will secret themselves away in their burrows when premolt approaches to wait out the process.

In these instances, the tarantula might cover over the entrance to its burrow with dirt or webbing.  If your spider suddenly buries itself after previously being out in the open and eating well, chances are it’s just in premolt. It will emerge again eventually, a bit larger and sporting a brand new exoskeleton.

3. Tarantulas normally don’t die in burrow collapses. Many new keepers fear that if their tarantula buries itself, it could perish from a cave in. I have heard of exactly ONE instance where this happened, and it was because the spider managed to burrow under a heavy rock the keeper was using as a decoration. This instance was a freak accident and nothing more.

The fact is, tarantulas will line their burrows with webbing, and that helps hold the walls together. If you’ve ever had to dig a tarantula out for rehousing, you’ll understand how tough and put-together these web-lined tunnels can be. Also, tarantulas are quite strong and very good diggers. Even if a tunnel was to collapse, as long as there was nothing heavy above it, the T would just dig its way out.

4. Your tarantula will not suffocate beneath the ground. Another misconception is that if a T closes off its den, it can suffocate to death. Again, not true. Tarantulas need much less oxygen than other animals, and most would naturally spend their lives in tight burrows dug far into the earth. As long as there is proper ventilation in the enclosure, they won’t suffocate.

When in doubt, always remember the golden rule of tarantula keeping: the tarantula always knows best.

In our quests to be the best tarantula keepers possible, we often forget a very important detail: tarantulas have evolved over millions of years and know how to survive. Unlike their human keepers, they are not prone to “irrational” decision-making. In most situations, they know what they are doing and what’s good for them. If your T suddenly buries itself, it’s not arachnid suicide. It’s only doing what it’s been programmed to do. Although you may have to wait a while to see your favorite pet again, understand that it’s not in any danger.

On of my P. atrichomatus slings buried at the bottom of its enclosure. This one spent almost a month sealed in.

So, to review, if your tarantula suddenly buries itself, there is only one thing to do…

Resist the urge to dig it up to “check on it.” If you succumb to the urge, you risk needlessly stressing it or, if it’s in the process of molting, KILLING it.

Also, do NOT try to open up the mouth of the burrow to “give it some air” or to allow for its escape. Again, just leave the animal be. It may be a week, it may be a couple months, but your spider will emerge eventually.

And finally, NEVER shove live prey down the hole if it’s not eating. Not only will this stress the animal out, but the prey item could kill the spider if it’s in the middle of a molt. Also, if the spider dispatches but doesn’t eat the intruder, you may now have a rotting bug corpse stuck in the burrow with your T.

At what point should I worry and dig up my specimen to check on it?

In 99% of the instances, it will be entirely unnecessary to dig up a tarantula. However, I’ve had folks ask how long they should wait before worrying. I would say if you have a small sling that has been buried for six to eight months without taking any food or making an appearance, it might be time to worry. The fact is, some slings will die; it’s an unfortunate part of nature that all specimens aren’t healthy enough to live.

If it’s a small specimen and more than a half-year has gone by, it might be time to do some investigating. After all, you don’t want to be keeping a dead T as a pet. Still, be sure to be very careful when digging the animal up, and keep in mind that you could harm it if it’s molting. Also, larger spiders can spend more time safely in their burrows as they are not fragile and prone to dehydration or starvation. For larger specimens, I would wait even longer.

That being said, I offer this anecdote for anyone considering digging up one of their tarantulas. I had a 3/8″ Maraca cabocla that burrowed deep in its enclosure last year and completely covered the entrance to its burrow. From late October until almost April, it did not eat and I saw no sign of it. At first, I thought it was just staying in its den for the winter. I’ve had many Ts do this, and it had never caused me any alarm. However, as more time passed, and I saw no movement within the vial, I assumed the worst.

Finally, I convinced myself that the small T had probably died over the winter, so I set to digging it out. I spent almost a half hour carefully removing the substrate and spreading it out on a white dinner plate so that I could hopefully find the tiny body. At one point my heart sank as I pulled out a masticated form I mistook as the spider’s corpse.

Finally, as I was removing the last bit of dirt, my little guy scurried out and stood upon the heaped contents of its enclosure as if to say, “dude…what the heck?” Needless to say, I felt silly (as well as a bit bad for the spider). Yup, I had jumped the gun; my tarantula was quite healthy and in no danger. By digging out its substrate, I had jeopardized its health and caused it needless stress.

I won’t make that mistake again.

Your tarantula has buried itself? Just relax!

Like many aspects of this hobby, patience and experience are key. As you experience this situation more and more, it becomes much easier to recognize it as the normal behavior it is. The next time your precious little one decides to play hide-and-seek on you, don’t let it be cause of worry.

And if you find yourself getting impatient, do what many of us do … just buy more tarantulas!

For more on MOLTING and signs of a molt, check out the article below! 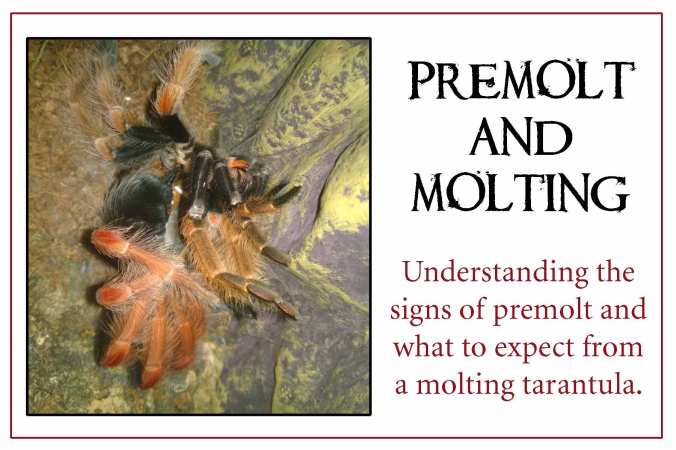 27 thoughts on “Help … My Tarantula Buried Itself!”