The Ceratogyrus darlingi or “Rear Horned Baboon” is an amazing little spider that gets its common name from a black horn that grows from its carapace. Unlike the fovial horns of other Ceratogyrus species, the C. darlingi’s protuberance slants towards the back of the spider. Although the purpose of this horn is still up for speculation, this unique feature makes for an incredibly cool ornamentation.

The Ceratogyrus darlingi is unique Old World species that hails from savannah biomes in the countries of Botswana, Mozambique and Zimbabwe in southern Africa. Here, this spider experiences a climate that sees both a hot and dry season as well as a rainy season, and temperatures that range from 68° F to 88° F (20° C to 31° C). As a result, the C. darlingi does well at normal room temperatures, which for most of us is upper 60s to mid-80 Fahrenheit (or around 20 – 29 Celsius). My first two specimens were kept between 68 and 76° F during the winter and between 72 and 80° F during the summer with my current two being kept in the 70s. Even when temperatures were on the cooler side, mine continued to eat and grow well.

Some keepers read about the warm and dry seasons with periodic droughts and immediately designate this species as an arid one. Unfortunately, what many fail to take into account are the rainy seasons, in which this spider would be exposed to much more humid and moist conditions. Furthermore, as a burrower, the C. darlingi would construct burrows down into the earth, where it would find more moisture and temperate conditions.

Although it’s true that they are adaptable, and adult specimens seems to do well on dry substrate with a water dish, I’ve found that slings and juveniles appreciate moist substrate. Start your spider with moist substrate, and allow the top layers to dry out a bit. This will allow your sling to dig to the moisture level that it needs. When you notice that the darker band that indicates moist substrate starts to shrink, it’s time to add more water. For smaller sling enclosures, I like to use a pipette to direct the water down into the dirt. This makes it easier to avoid flooding the spider’s burrow. In these instances, a syringe will also work.

For tinier slings, a deep dram bottle or 5.5-oz (163 ml) deli cup will work great for an enclosure. Larger, more established slings will do well in a 16 to 32-oz (.47 to .94 10.64 L) deli cup or something around that size. Feel free to experiment with what works for you, but just be sure to keep ventilation holes small enough that they do not permit escape. If the enclosure size permits, I like to add cork bark and a water dish. All of my slings did some burrowing, with two of them moving a lot of substrate around like mini bulldozers as they landscaped their living space to their liking. As a general rule of thumb, it’s always prudent to make sure that slings have access to moist substrate.

Behavior-wise, all of my slings were more shy and skittish than defensive. Once burrowed, I would rarely catch them out of their dens. When disturbed, they would much rather bolt to their dens than stand and fight. That said, this species is very fast and packs potent venom, so caution is always advised during maintenance and rehousings.

This species is an excellent eater, and I’ve found that mine grow rather quickly. I fed my slings one small roach or cricket twice a week, and all five were voracious eaters and excellent hunters. There is no right or wrong feeding schedule, and many keepers feed their spiders weekly or bi-weekly. Find a feeding schedule that works well for you. If you can’t find prey small enough, slings will scavenge feed off of prekilled items. Cricket drumsticks (severed cricket legs) or mealworm sections work great in these situations. Mealworms can also be refrigerated, which means you can save extras and always have them on hand.

When they enter premolt, slings will often seal off their burrows with webbing and dirt and refuse food. If your sling does this, it is normal behavior and their way of putting up a “do not disturb” sign. Do not try to dig up your sling or force food into the burrow during this period. When the spider is ready to eat again, it will open the burrow and, in some cases, toss out its old molt.

As “juvenile” is a relative term when discussing tarantula size, we’ll use that designation to refer to C. darlingi that have reached the 1.5 to 1.75” (3.8 to 4.45 cm) mark. Depending on temperatures (warmer temps lead to higher metabolisms and faster growth), many will find their spiders in need of a rehouse in a year or less. 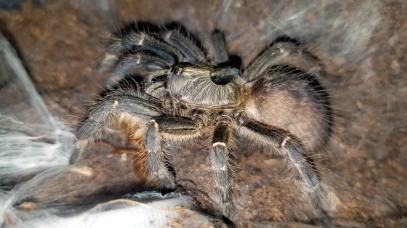 There are many suitable enclosures available for juvenile spiders, including small critter keepers and the 2-quart clear Mainstay canisters sold at Walmart. Personally, I find something between 2-quarts to 1-gallon (1.89 to 3.79-liters) works well as long as it offers some room for 4 to 5” (10 to 13 cm) of substrate. As always, I include a cork bark hide with a starter burrow, some sphagnum moss, and a water dish. Also, be sure that the enclosure is well ventilated. I choose to keep part of the substrate moist for my juveniles, and I’ve found that they seem to appreciate it. This is also one of the species that I’ve caught drinking on several occasions, so they definitely appreciate some sort of moisture. If your specimen engages in a lot of surface webbing, you can also dribble water on the silk to give them another place to drink from.

Juveniles are just as voracious as slings, and mine easily took down medium crickets and roaches. Once they hit this size, I reduce their feeding schedule to once a week or so. I’ve found that larger specimens may burst from their burrows to grab prey, offering keepers an opportunity to catch a glimpse of their elusive pets. My juveniles easily take down medium to large crickets or B. lateralis roaches, and I’ll often drop in more than one. If using B. dubia, mediums work great. Just be sure to crush the heads first to prevent the dubia from burrowing, hiding, and playing dead.

It’s important to mention that if this species is not given enough substrate to burrow in, it will create its home with copious amounts of webbing. Also, some folks report that their specimens don’t burrow and instead opt to web. That said, it’s recommended that you give all of your specimens enough substrate to properly burrow. Specimens that are forced to web instead of burrowing can be more skittish and defensive.

It should be noted that C. darlingi males are much smaller than their female counterparts. My first three C. darlingi were male, and I was actually shocked when the first one matured out at about 2”. The other two were slightly larger at around 2.5” or so, but they were still quite small. Females, on the other hand, reach a max size of 4.5 to 5” (11.4 to 12.7 cm), making them a medium-sized spider.

As for enclosure sizes, adults will do well in something around 2.5 to 5 gallons (9.46 to 19 liters) or so. Most adults will continue to burrow, so any enclosure has to leave room for several inches of substrate. Personally, I like to give my adult burrowers 7 to 9” (17.8 to 23 cm) to burrow in. Giving them more space definitely won’t hurt them, so something around 10 gallons with a lot of substrate will likely lead to a labyrinthine series of tunnels. Again, specimens may also do some webbing on the surface, so be sure to leave a bit of space for the white stuff.

There are many types of appropriate substrates for spiders, including coco fiber, peat, and regular topsoil. Some also like to use a combination of any or all of these to get the desirable properties they need. Vermiculite can also be added to help with water absorption and retention. Feel free to use what works well for you and to experiment with your mixes.

Young adult and adult specimens can easily take down large crickets, B. dubia roaches, B. lateralis roaches, or super worms. If feeding smaller prey like crickets or B. lateralis, I usually drop in two or three prey items. A nice, fat B. dubia roach is a great meal for a skinny post molt spider. As with my juveniles, I generally feed my young adults once a week. Keep in mind that if you’re feeding your tarantula bigger meals, you can offer food less often.

Again, if your specimen stops eating and barricades itself in its burrow, it is likely in premolt. When this occurs, keep water available, moisten down a corner of the substrate, and wait for it to reopen its burrow.

As an Old World tarantula species, the C. darlingi can be fast and defensive. Couple this with potent venom, and you have a spider that could pose a problem to those new to the hobby. Unfortunately, this is not a good beginner species. That said, many folks WILL recommend the Rear Horned Baboon as a good “starter Old World” due to its ease of care and relative shyness. Those looking to make the transition from faster New World tarantulas to Old Worlds should definitely consider the C. darlingi.