A couple months ago, I saw a listing for Lasiodora itabunae slings on Ken the Bug Guy’s website, and I was immediately intrigued. I hadn’t heard of this species of Lasiodora before, and some research didn’t bring up much in terms of first-hand reports on their upkeep. Either they were fairly new to the hobby, or just hadn’t caught on with enthusiasts. As I own three Lasiodora parahybana’s and love them, I decided it would be fun to try out one of its relatives.

My L. itabunae a week after its most recent molt. It morphed from a light reddish-brown to steely blue with red hairs on its abdomen.

I ordered what was supposed to be a 1.5 inch L. itabunae, but I was pleasantly surprised to discover that my new acquisition was just over three inches (thanks for the upgrade, Ken!). At the time, the spider was a light, reddish-brown with a very bald, fleshy-toned abdomen. I set him up in his new enclosure, and he ate immediately. I was instantly impressed by the ferocity and speed in which it attacked and subdued its prey.

After reading a handful of firsthand husbandry accounts, I set the enclosure up identically to my L. parahybana, with a cork bark hide, dry coco fiber substrate deep enough for burrowing, and a water bowl. Temperatures are about 70 at night and 78-80 during the day. When watering it, I let the water overflow a bit, but I never spray it for humidity.

It became apparent very early on that this spider was going to be a voracious eater. It spent only a week hiding meekly in its core bark burrow, then it sat boldly on top of it, seemingly waiting for me to drop a cricket in. Twice, it caught the prey before it could hit the substrate. The other times, it would bolt across the cage, snatching the cricket in the blink of an eye. Next to my P. cancerides juveniles, this might be my favorite T to feed.

My 4+” L. itabunae likely waiting for its next meal.

About two weeks ago, my itabunae molted, and the transformation was amazing. Not only did it pick up close to an inch of size, but it also sported brand new colors. The reddish-brown was replaced by a beautiful steely blue, and its abdomen was now highlighted by red hairs. He’s a truly gorgeous T. 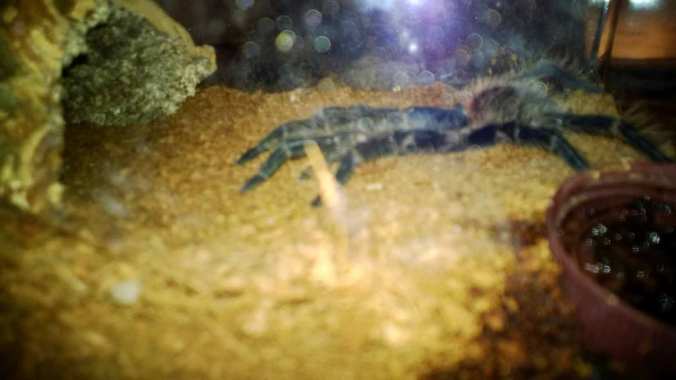 My L. itabunae stretching out after a recent molt.

For folks interested in large terrestrial Ts with easy care requirements and an awesome feeding response, consider L. itabunae. I will definitely be looking to acquire more slings of this amazing species.