Don’t panic…learn to watch for the signs.

Fewer facets of tarantula keeping can cause more excitement and confusion for the novice keeper than premolt. This is the point where the tarantula usually stops eating for a bit and prepares its body for the stresses of molting its exoskeleton. As part of the joy of keeping tarantulas is experiencing their growth, an impending molt should be a joyous occasion.

However, as many newer keepers aren’t familiar with what premolt entails or looks like, it can also be a confusing situation that leads to worry and stress. Couple this with the fact that premolt periods can drag on for weeks, and you have the makings of a concerned keeper.

Part of the issue is because we have all grown up keeping pets that need to be fed daily in order to stay healthy. So, when our beloved little spider suddenly stops eating for several weeks, years of experience preys on our nerves and the worrying begins. Should I try feeding again? Does she need more water? Is the enclosure too large? Is she sick? Should I dig her out of her den? These are the questions that dog the novice keeper as he watches his pet, waiting for some sign that everything is totally normal.

I went through it myself the first time my little L. parahybana sling suddenly closed off the entrance to its den and buried itself for over a month. I worried that the poor little guy was trapped by a cave-in or had died. Luckily, I chose to leave him alone instead of trying to dig him out, as when he finally reappeared it was with a new exoskeleton and an extra 1/4″ of length.  Since then, I’ve learned to observe and recognize the signs of premolt.

Are you thinking that your specimen might be in premolt? Here are some telltale signs to look for…

This is probably the most obvious and common sign. You’ve been feeding your specimen regularly for several weeks, and suddenly it stops eating. Most species will stop feeding during their premolt period (although there are exceptions) as they prepare their bodies for the arduous process.

That is not to say that a tarantula might not stop feeding for other reasons. The G. rosea is known to fast for long periods of time, even when not in premolt. A stressed tarantula may also refuse food. Therefore, consider some of the other signs as well.

2. The tarantula has a fat, shiny abdomen

Most tarantulas ready for premolt will sport nice, plump abdomens up to 1.5 times the size of their carapace (or even larger for an over-stuffed specimen). If your tarantula has a nice, bulbous booty, and she has stopped eating, chances are she’s in premolt. As the flesh around the area stretches, the abdomen may also appear to be shiny.

The shininess is often more evident in slings than their older, much hairier counterparts. My little G. pulchripes, G. rosea, and L. parahybana slings all get “shiny hineys” whenever they are entering premolt. My P. cancerides slings and juveniles look like little grapes ready to pop when they are in premolt. 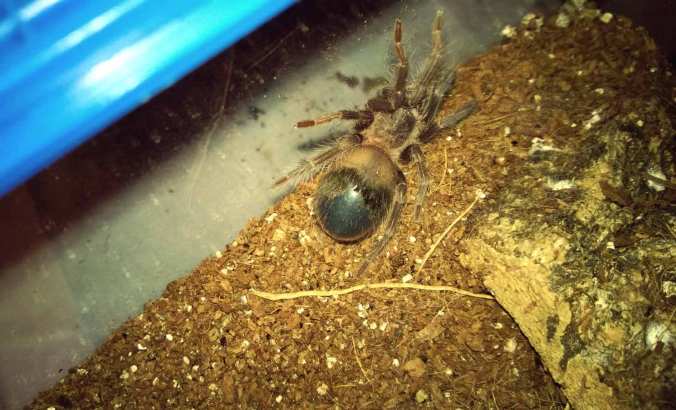 A female LP in premolt. Notice the shiny abdomen. This is particularly noticeable as she has kicked all the hair off. Also, the abdomen is very dark.

As the new exoskeleton forms under the old one, the spider will often darken up a bit. This is particularly evident on the abdomen where new hairs can be seen through the stretched skin here. Many of my slings will have a dark spot on their abdomens when in premolt, and it will continue to grow the closer they get to the actual molt. For species that do a lot of hair kicking and therefore have a bald spot, this darkening is especially evident. 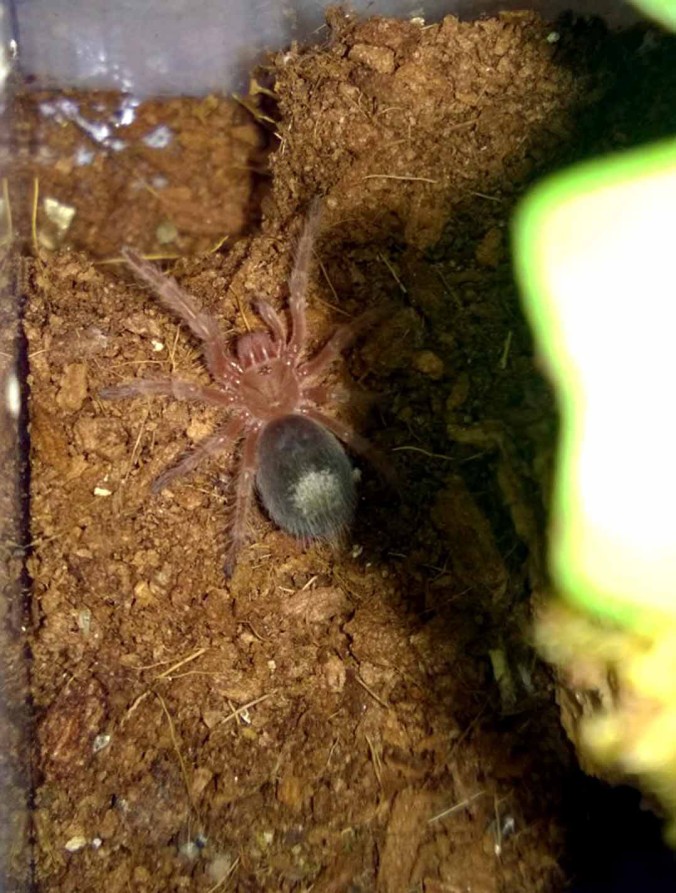 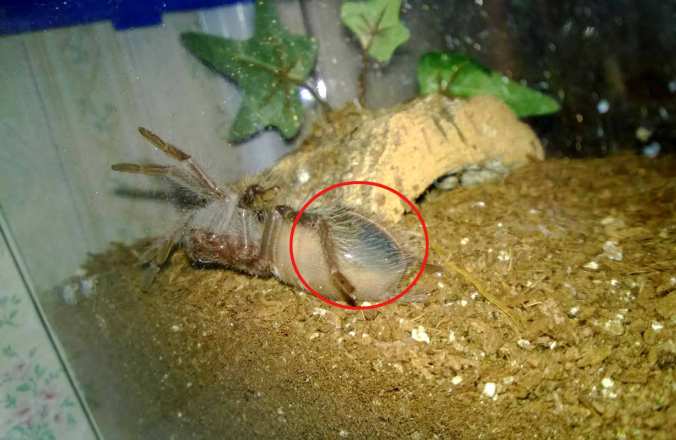 My L. itabunae in premolt. Notice the shiny abdomen and the dark patch forming .

Not all of the indicators are physical; an observant keeper should notice some behavioral changes as well. Besides not eating, most of my tarantulas that are in premolt become less active and often more secretive. Keep an eye on your tarantula, and along with the physical signs listed above, look for a change in behavior. Some of my most hyper species become noticeably sluggish when they are in premolt. For example, my GBBs tend to be fast little buggers who are constantly moving around their enclosures. However, when in premolt, they often become much more sedentary, sitting in one spot and often tucking themselves away behind their cork bark. Speaking of secretive…

5. The tarantula has buried itself in its den.

I frequent the Arachnoboards forum, and there is usually at least a post a week by a concerned keeper who wants to know if his/her buried T is okay. Heck, this is the situation that caused me alarm when my LP buried itself during a molt. Many tarantulas will retreat to their burrows and close of the entrances when entering a premolt period. My LP slings, M. balfouri juveniles, and G. pulchripes slings all bury themselves before a molt. Some things to consider if your T buries itself due to premolt.

They are not in danger.

They will not suffocate.

They have not been buried alive.

They do not need to be rescued.

The tarantula is just looking for some privacy and security during this vulnerable period. The tarantula will reopen its den once is has molted and hardened up. DO NOT freak out and try to dig the poor creature out; you only run the risk of distressing the animal and possibly interrupting its molt.

6. The tarantula has constructed a hammock-like web “mat” in its enclosure.

This web is referred to as a “molt mat”, and it is where the tarantula will flip over on its back when it molts. You may catch your premolt T laying layer after layer of web in a small area, and some of the new world species will actually kick hairs on the web as a form of protection. If you see this behavior, it means that your tarantula is about to molt very soon, usually within a day. For arboreal species, they will sometime build elevated “hammocks” off the ground for their molt mats or seal themselves in their funnel webs. This behavior serves the same purpose. 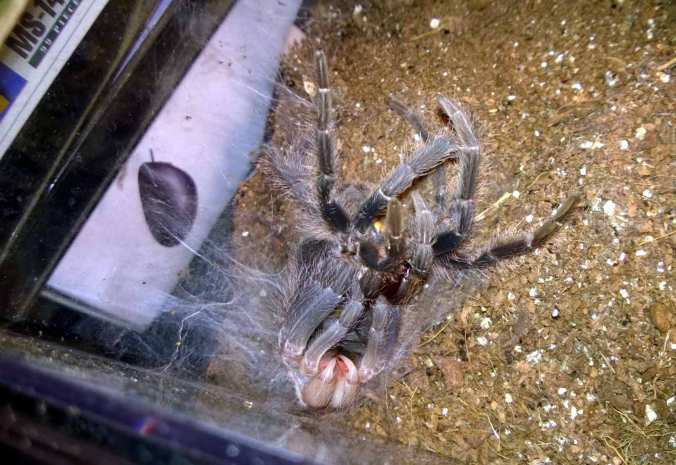 My female LP during a recent molt. Notice the molt mat on the left hand side of the photo.

IF IT IS ON ITS BACK, IT IS NOT DEAD!

That’s right, this is normal behavior; this is the position they get in to molt.

DO NOT touch a spider in this position.

DO NOT flip over a spider in this position.

DO NOT throw away, flush, or bury a spider in this position.

DO NOT blow on it.

DO NOT spray it with water.

DO leave it alone and let it complete the exhausting task of molting in peace. Molting is a natural occurrence for a tarantula, but it is also a period where they are quite vulnerable. Any fiddling with the animal could prove deadly to the T.

Hopefully, the photos and explanations above will help other keepers recognize and enjoy their tarantulas’ premolt without worry. Keep in mind, there is no set time for how long a tarantula can be in premolt. For slings, it can take anywhere from couple weeks to a month. Adult species can often spend several months in premolt. My 3.5″ B. smithi stopped eating and secluded herself for two months before finally molting. Conversely, my 3.5″ L. parahybana female molted two weeks after her last meal. Don’t panic if your animal takes a while; it’s a very natural process, and it will molt when it is ready.

And, for anyone curious as to what a tarantula molt looks like, please check out the following video.

245 thoughts on “How Do I Know if My Tarantula Is in Premolt?”