A Charity Auction for an Amazing Cause

My buddies over at the Facebook Group Midwest Fang Gang are  holding a charity auction to benefit a family who tragically lost their 2-year-old son to cancer very recently.  The proceeds from the auction will go toward helping this family pay for doctor’s bills, funeral expenses, and other monetary needs incurred over the poor boy’s hospitalization. Below is a flier for the auction, including the vendors participating and the items that will be up for bid. As response to this event has been so great, an extra day or two may be added. 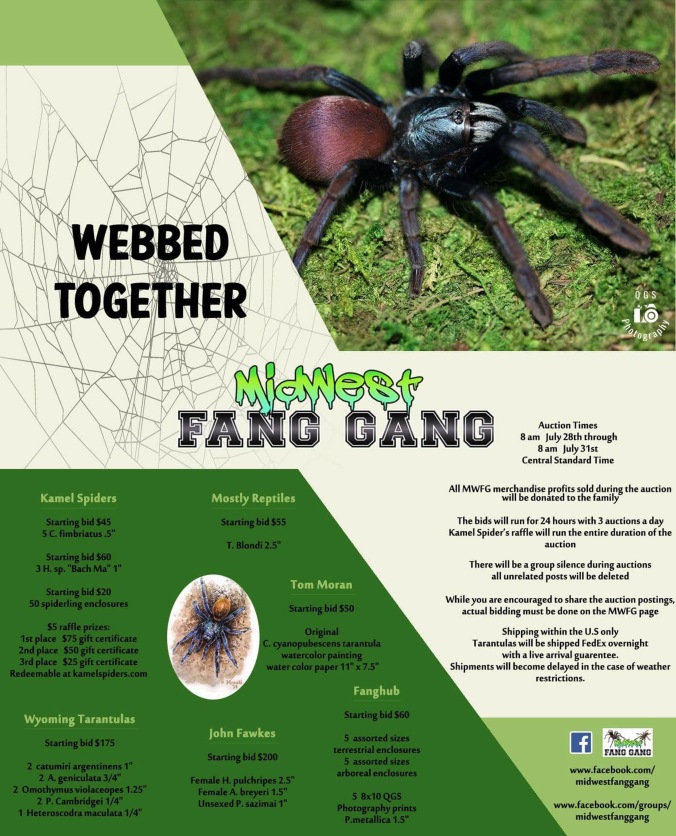 For my small part, I’m donating an original signed watercolor painting of a C. cyaneopubescens (GBB) from my personal collection. The painting in 7.5 x 11″ and on cold pressed watercolor paper. The bidding on this piece will start at $50. I know that most folks will probably be more excited about the actual living tarantulas, but I do hope some of you are interested and make a bid. Personally, I think it would look great framed and hung in a tarantula room… Just click on the image to bid.

END_OF_DOCUMENT_TOKEN_TO_BE_REPLACED

A picture is worth a thousand words…

When I first became hooked by the hobby, I literally had to be convinced by a vendor to pick up my first spiderlings. True story.

At the time, I was looking for sexed juveniles and adults, and the thought of caring for a tiny, fragile ‘sling was terrifying to me. What would I feed it? How should I give it water? What if the temperature in my house was too low? A thousand daunting scenarios played through my mind, and almost all of them ended with a dead spider.

When I finally took the plunge and ordered my first two 3/4″ slings, I remember the feeling of dread I had waiting for them to be delivered. I was convinced that I had bit off more than I could chew, and now there was no turning back. When they arrived, I fussed over their enclosures, fixated on their burrowing and webbing habits, just about developed an ulcer when one buried itself, and panicked when they inevitably refused meals. I also spent hours on Google researching each seemingly odd or worrisome behavior for some type of reassurance that I wasn’t screwing up. END_OF_DOCUMENT_TOKEN_TO_BE_REPLACED