In February of this year, I purchased an A. insubtilis which I later had sexed as a male. After being housed in his new enclosure, this gorgeous guy settled right in, eating immediately. He proved to be a voracious eater, quickly stalking medium-sized crickets and violently subduing them before feeding. After a couple months, he stopped eating, signaling the beginning of his premolt. 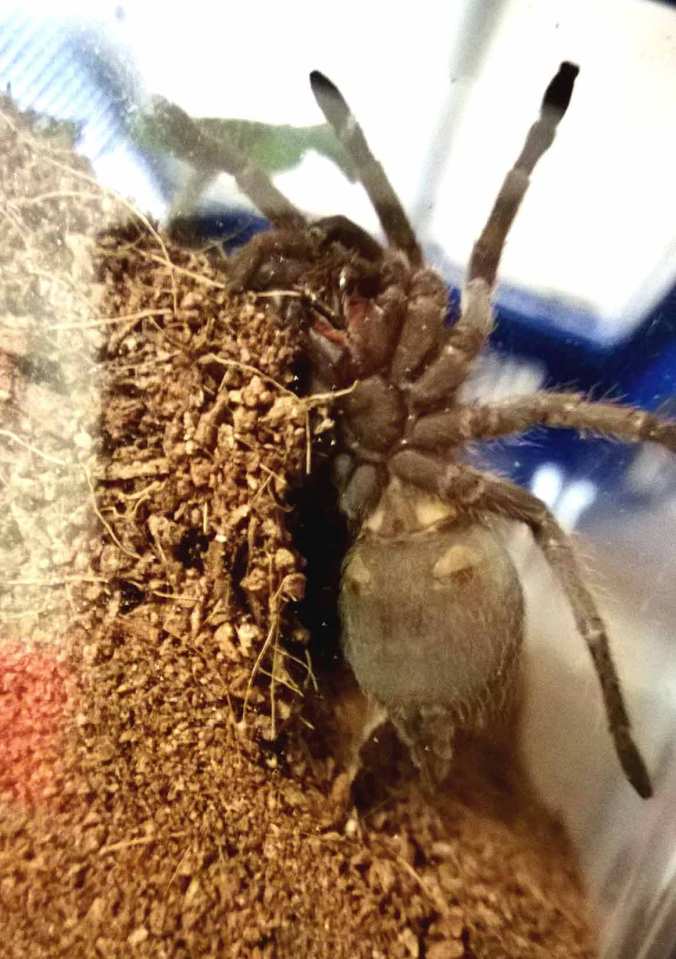 My 2″ male A. insubtilis shortly after being acquired in February.

Three weeks passed, and I came home to discover that he had molted while I was at work. I noticed that his exuvia was still slightly attached to his abdomen, so I moistened the area and used a cotton swab to gently remove it. After a week, he took down and ate his first pre-molt meal. Despite the slight molting difficulty, the little guy would be fine.

Or so I thought.

My A. insubtilis just moments after I used a Q-tip to remove a stuck patch of Exuvia from its abdomen.

While feeding some of my other Ts last week, I noticed that my male A. insubtilis was walking a little strangely. As he lifted each leg, he seemed to shake it as if something was stuck to his toes. I watched him for a bit before chalking it up to normal T behavior.

The next day, it was much worse, and I realized that my poor guy was exhibiting signs of DKS, or Dyskinetic Syndrome. DKS is a series of symptoms characterized by jerky motions, loss of coordination, and an inability to eat. It most often ends in the death of the tarantula. Although no one is completely sure what causes DKS, some theories are pesticides (including flea and tick treatments for dogs and cats), micro organisms infecting the T, mold, or other toxins.

I’m not sure if the molt had anything to do with his development of DKS, or whether it was other factors that caused it. I only mention it as it was something abnormal that occurred just before he started exhibiting signs.

Below is a video of my poor A. insubtilis exhibiting signs of DKS. Notice the movements each time I touch the side of the enclosure. Normally, I wouldn’t mess with a T in obvious stress, but in this case, I wanted to get a short video for records and to show others. It’s not fun to watch, and it’s a bit graphic (my wife can’t stand to see it).

My little guy is definitely losing the fight, and although I put him into a tarantula ICU (deli cup with moist paper towels and elevated humidity), he’s starting to slow down and curl up. I fear the “death curl” is not far behind. As I do not like watching anything suffer, I’m considering euthanizing him before it gets worse.

Click HERE for an an update on this T.