This can’t be a real tarantula…

When I first began researching what type of tarantulas I might get to start my collection, I encountered a photo of a spider so colorful and beautiful, that I was at first convinced that it was a clever Photoshop creation. With its shimmering blue legs, metallic aqua carapace, and stunningly vibrant orange abdomen, this animal looked too striking to be real. A quick search revealed this amazing specimen to be the Chromatopelma cyaneopubscens, common name Greenbottle Blue or GBB for short.

Immediately interested, I began researching the GBB to learn care requirements, temperament, and cost. Surely this unique tarantula commanded high prices like the equally beautiful P. metallica? Or, being new to the hobby, would I be overwhelmed by this spider’s temperament or husbandry requirements? I was delighted to learn that, despite being a bit skittish and faster than many recommended “beginner species”, the GBB’s heartiness and ease of care made it approachable for someone relatively new to the hobby. And with .75″ slings costing around $35-$40, they were definitely affordable.

GBBs originate from an arid, tropical desert region in Venezuela, where they live in heavily-webbed burrows under local foliage. When researching, I discovered many older accounts by keepers who said that GBBs were a fragile species that was difficult to keep alive in captivity. For years, many kept this spider in moist enclosures with damp substrate and constant misting. As GBBs hail from an arid region, these wet, stuffy enclosures often proved fatal. GBBs should be kept on dry substrate in well-ventilated enclosures. As slings are more vulnerable to dehydration, you can moisten the edge of the enclosure and a corner of the substrate once a week (Do not spray; several drops from an eyedropper will suffice). For juveniles an adults, a water dish will provide any water they may need.

Although slings may dig a bit, most GBBs will construct elaborately-webbed dens using any supplied cork bark hides or furnishings for anchors. Although this species has been referred to as a semi-arboreal, this not true— this is a terrestrial species. However, if provided with an enclosure with some height and taller furnishings (cork bark, vines, plants, etc), many GBBs will web up these and choose to perch themselves above the ground. The two juveniles I keep are often in their webs just an inch or two above the substrate.

Some keepers see this behavior as a sign that this is an arboreal species, when instead it’s likely an animal making the best of the surroundings it has been provided.  As a terrestrial species, a fall from too high up could injure this T, and care has to be taken to insure that distance between the substrate and the top of the enclosure is not too high. This species should not be set up as an arboreal due to their skittishness and increased chance of injury from a fall.

My two juvenile GBBs are kept on dry coco fiber substrate with cork bark slabs and water dishes provided. They do not use the cork bark as hides, but instead as anchors for their copious webbing. Even as slings, these two liked to fill their enclosures with thick layers of web. Despite the webbing, both usually sit right out in the open, remaining highly visible and making for fantastic display animals.

Part of a GBB’s hardiness comes from its excellent prey response and appetite. My two GBBs are, by far, two of my most vicious hunters. Because of the extensive webbing, they generally feel the vibration of the cricket or roach the moment it is dropped into the enclosure. I’ve had several instances when a cricket was snatched up the second it hit the substrate. They are fast and deadly, tackling and subduing prey items ferociously and efficiently. Out of all the species I keep, the GBB is in my top three of Ts I most enjoy watching hunt.

When slings, I would feed my specimens one small cricket every three or four days. As juveniles, I offered one medium/large cricket twice a week. The only time either has ever refused a meal is when in pre-molt. Their growth rate was medium to fast, with frequent molts bringing moderate changes in size. During its first year with me, my oldest GBB molted six times and in that time it went from .75″ to 2.75″. Molts usually came about every two months during this period.

As young adults, their molt schedules slowed down to about once every four months or so. Behaviorally, the young adults are a bit more skittish and prone to kicking hair at the slightest disturbance. Now that they are both around 4″, I feed them two large crickets once a week. 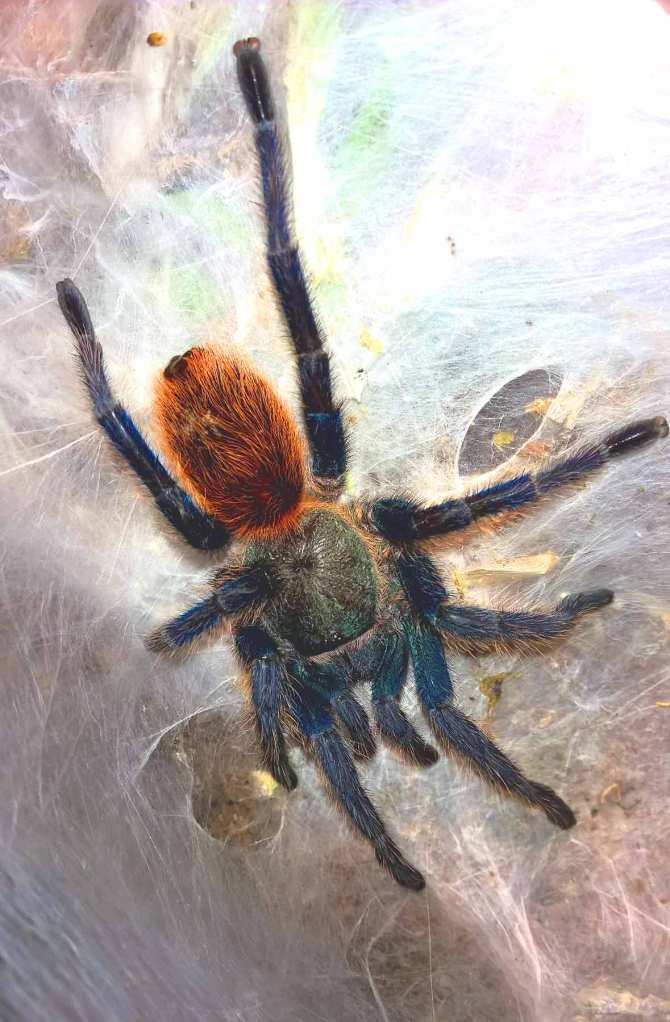 The GBB’s hardiness, ease of care, and affordability might make one think that it’s a great starter species, and in some respect that is true.  However, this is a tarantula with some speed that also has a reputation for being skittish. I have never seen a threat posture or any type of defensive display from my specimens, and they have never been aggressive. As adults, however, they do like to kick hairs and will eventually bolt if disturbed. A keeper used to slower, calmer species may not be ready for a spider that may be out of its cage in the time it takes them to blink. Rehousings can be particularly fun, as the GBB is prone to bolting unpredictably in any direction BUT the one you want it to go in. That being said, a keeper new to the hobby who practices caution and care should have little problem with this beautiful species.