A beautiful alternative to the Lasiodora parahybana!

When I first encountered the Lasiodora itabunae, it was while perusing Ken the Bug Guy’s site. Although I had heard of several Lasiodora species, this one was brand new to me. A quick Google search yielded very little information on this species, and I had trouble even coming up with a common name or photo for it. To say that I was intrigued would be an understatement. After finding a couple keeper reports in which they described basic husbandry requirements for this species, I decided that I would add one to my collection.

The 2.5″ juvenile that arrived was a light brown in color and a bit skittish in behavior. It quickly adopted a rounded piece of cork bark for its enclosure, and spent most of its time waiting just inside its makeshift den for me to drop a cricket in. Prey items were snatched up quickly, and it only refused a meal during premolt. During this period I would occasionally catch my little guy out, but if I touched the enclosure, he would quickly dart back into his den.

Although this is a hearty species with no strict humidity requirements, I have made some observations that have lead me to adjust how I keep him. Initially, I kept my itabunae on dry coco fiber substrate and supplied a water dish that I kept filled. However, after noticing that my little guy stood directly over the dish for hours at a time during premolt, I started wetting down a third of the enclosure. This species seems to appreciate a bit of extra moisture at times, so I now give it the option of dry or damp. I do not, however, measure the humidity in the enclosure.

For temperatures, I keep this guy at about 77º during the day with a drop to about 70-72º at night. In the summer, the temperature range is around 74-84º. I did not notice a difference in eating habits between winter and summer; it ate well regardless. It seems to do very well at room temperatures, even if the temps dip briefly into the high 60s. 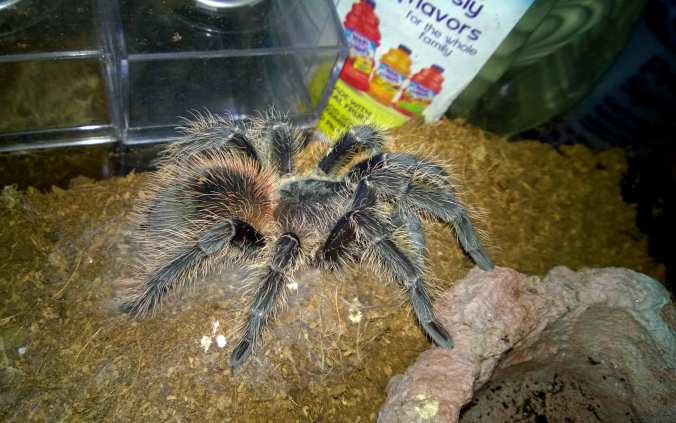 Some surprises at around 4″

This is a fast growing species that molts regularly and puts on decent size during each molt. Within two molts, it jumped from about 2.5″ to a much thicker 4″. It was during this second molt in my care that I noticed some impressive physical and behavioral changes. Physically, the overall brown coloration was gone, replaced by a gorgeous deep blue/black overall coloration with reddish hairs peppering its abdomen. This is a very handsome tarantula with a striking appearance.

Behaviorally, gone were the days of this T cowering in its den whenever someone touched its enclosure. After this molt, it stood boldly on top of its cork bark as it waited for prey, never budging when I moved or opened its cage. The crickets I dropped in for it barely had a chance to hit the substrate before they were snatched up, and twice it grabbed the cricket directly from my tongs before I could drop it in.

To be clear, this specimen did NOT become aggressive or defensive. It is just much more bold and has a more ruthless food response. It has never charged at me or kicked a hair when I’ve opened its enclosure to do maintenance or to change the water. Due to its new-found attitude, it has now become one of my best display animals, as it is always out in the open.

This species has a great appetite, and I feed my 5″ specimen 3 crickets or a large dubia roach once a week. This is a large T that can grow to 7-8″ in leg span, so I’ll look forward to watching it put on even more size.

My L. itabunae a week after its most recent molt. It morphed from a light reddish-brown to steely blue with red hairs on its abdomen.

I currently house my 5″ specimen in a 5 gallon acrylic enclosure from Lorex Plastics. The substrate is now a mixture of coco fiber, topsoil, vermiculite, and peat moss, and I’ve provided a cork bark hide (which it has only used to molt). A water dish filled with fresh water is always provided, and I use a plastic bottle with holes burned in the top to sprinkle water on this side of the cage.  I usually let this side dry out before repeating (although I keep it moist during premolt). 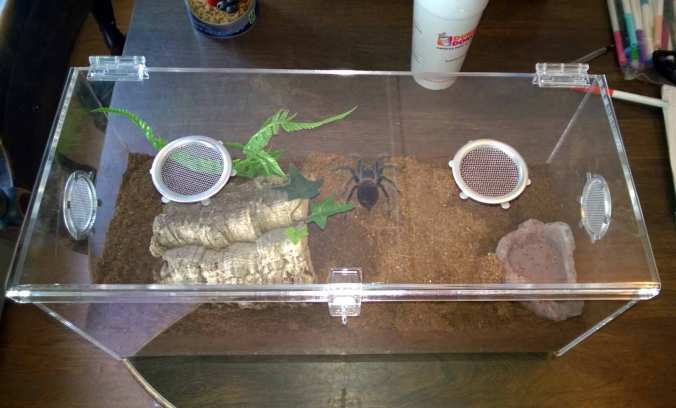 My enclosure decorated and now the new home of my L. itabunae.

L. itabunae is a hardy, fast-growing, striking tarantula that would compliment any collection.

Those looking for an uncommon and handsome tarantula with simple husbandry would be wise to check out Lasiodora itabunae. I will definitely always have one of these unique spiders in my collection.