One of my E. pachypus young adults

An adorable and beautiful baboon tarantula.

About a year ago, I stumbled onto an article about good “beginner baboon” species for hobbyists not currently keeping Old Worlds. One of the species mentioned was the Eucratoscelus Pachypus or “Stout Leg Baboon” tarantula. I immediately Googled some pics and was floored by the unique look of this species. With a sleek and golden overall body and overly-large, thick brown back legs, I was favorably reminded of the satyr from Greek Mythology. When I saw that Ken the Bug Guy had some of these Tanzanian beauties in stock, I had to have a couple.

The E. pachypus is an obligate burrower, meaning that any enclosure setup should provide deep substrate to allow for it to construct a burrow. My 2.5″ young adults are in enclosures that offer about 4-5″ of depth in which to dig. As this species comes from arid climates, I use a combination of dry coco fiber and peat for the substrate. A water dish is also provided at all times. I initially supplied each with a piece of cork bark over a small “starter burrow” (a hole made with my finger), and both of my specimens quickly utilized these starter dens to construct their own homes. 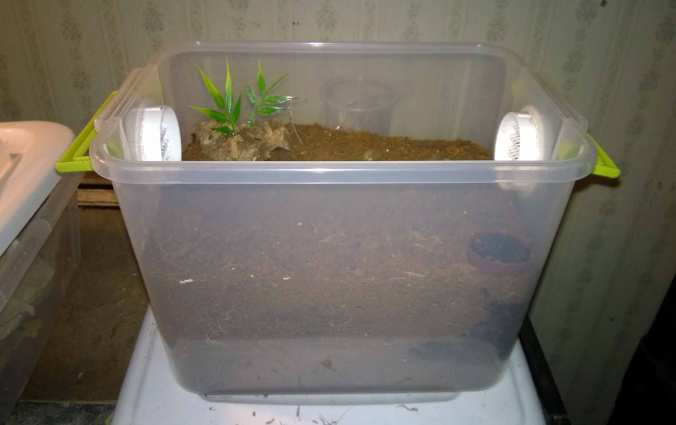 The custom enclosure for my juvenile E. pachypus.

Unlike some of my other burrowers that angle their entrances , this species digs a deep vertical tunnel that leads to a large burrow at the bottom. When a prey item wanders nearby, they use those large back legs to explode out of the hole with amazing quickness. It really is fascinating to watch. And, because the entrance is vertical, you are afforded many more glimpses of this species than you’d normally get from a “pet hole.” So far, mine have proven to be excellent eaters. I feed them two adult crickets a week, and so far neither has refused a meal.

When it comes time to rehouse my two, I will likely look to create an enclosure that offers even more depth than I usually allow for my burrowers. I’ve been impressed by how they construct their homes, and I’m eager to see what they will do when given even more room to dig.

A look down my E. pachypus’ vertical den. You can see my specimen sitting at the bottom.

E. pachypus hails from arid regions, so there are no strict humidity requirements. A water dish will supply all of the moisture it will need. As for temperatures, I keep my specimens in a the warmer corner of my tarantula room, which ranges from 72-77º in the winter, and 76-84º in the warm summer months. Although these are the temps I keep mine at, the species would also do well at temps in the high 70s to low 80s.

This is a smaller species, with full-grown specimens obtaining a max size of about 4-4.5″ DSL. They are also reportedly a slow-growing tarantula, with some folks comparing their growth rates to the glacial pace of the P. muticus. I will be looking forward to the first molts from mine, and I will be sure to document the amount of time that passes in between each molt and the size gained.

Although a baboon tarantula, the E. pachypus is generally recognized for having a less-aggressive temperament than some of the other African spiders. My two specimens seem very content to flee into their burrows if I disturb them, and I’ve yet to see a threat pose. That said, they can show a bit of spunk, and some report specimens that have quite a feisty attitude. They are also very fast and, being an Old World species, can pack a heck of a bite. Despite their reputation for being more calm, it’s important to remember that this is not a T to handle, and respect should always be shown when interacting with it.

Where are the boys at?

This is a sexually dimorphic species, with only the females getting the large dark fluffy back legs. Unfortunately, this is a notoriously difficult species to breed, and a strong captive bred population has yet to be established in the States. Further complicating things is that most of the specimens available in the states are wild caught females. Males are rare and very difficult to come by. Some believe that those capturing the sub adults for the pet trade don’t recognize the males as being the same species, and therefore don’t collect them. Whatever the reason, keepers trying to breed this species have a heck of a time finding mature males. Hopefully, someone in the US has luck with breeding this species soon so we can start seeing some captive bred stock.

A unique, beautiful, and easy to care for tarantula.

For those interested in acquiring their first Old World species, or for established keepers looking for an interesting tarantula, the E. pachypus deserves your attention. With simple husbandry, a manageable attitude, and truly unique look, it’s an excellent addition to any collection.