The new “jewel” of the hobby.

Over the years, there have been dozens of newly introduced tarantulas species that have caught the eyes of hobbyists with their undeniable beauty and the appeal of being a rarity in the hobby. More recently, the Poecilotheria metallica and Monocentropus balfouri were two spiders that delighted keepers with their gorgeous blues while draining wallets with their steep costs for even the smallest slings. Even today, with both species being readily available in the hobby, they still command high prices.

Today, many keepers consider the Harpactira pulchripes, a striking orange bodied and metallic blue legged beauty, the hobby’s latest crown jewel. This relatively new African species pops up on many keepers’ wish lists, and folks who manage to acquire one proudly share photos like a rich kid showing off his new sports car. And like a status car, these little spiders can come with a shocking price tag that many find ridiculous.

The fact is, new species, especially African ones like the Harpactira pulchripes are first collected and bred by Europeans and exported to the United States in limited quantities. Couple the cost of legally importing tarantulas into the US with their initial limited availability, and you have the makings of one pricey T.

Check out my female in action in the video below!

Early on, the only folks generally interested in paying these prices, often reaching well over $1,000 for a pair, are breeders looking to be the first to breed the species stateside (and make a pretty profit in the process). Other interested hobbyists will often wait a year or two until a new species is successfully bred a couple times, bringing batches of more affordable slings into the marketplace.

When I first saw a photo of a H. pulchripes, I had only been really into the hobby for a short time and I had no idea that I was viewing a newly introduced spider. I was therefore shocked when I saw that .5″ slings were going for about $500. It didn’t take me long to abandon all hope of acquiring this gorgeous spider any time soon.

In about January of last year, I got a lead that one of the breeders I normally buy from was expecting a shipment of babies, and slings would be available for $300 each or $275 a piece if you bought three. Although I considered making a purchase, that was a still a bit out of my price range. Over the next several months, I watched as prices for .5″ slings decreased from this price point to as low as $225 from one dealer. With a few folks managing to produce slings in the US, prices were already falling.

Finally, I found an offer that was almost too good to be true. Stamps Tarantulas was offering 2.5″ sexed female juveniles for $300. Even better, he was having a 25% off everything sale. I would be able to get a guaranteed female for less than I almost paid for a single unsexed sling. I jumped at the opportunity and placed my order.

Now, there was a slight mix-up with my order, which lead to me being sent a 1″ sling instead of my female. Steven was quick to rectify the situation, and when all was said and done, I was the proud owner of both a H. pulchripes sling and a sexed juvenile female. To say I was a happy customer would be the understatement of the year (thanks, Steven!). 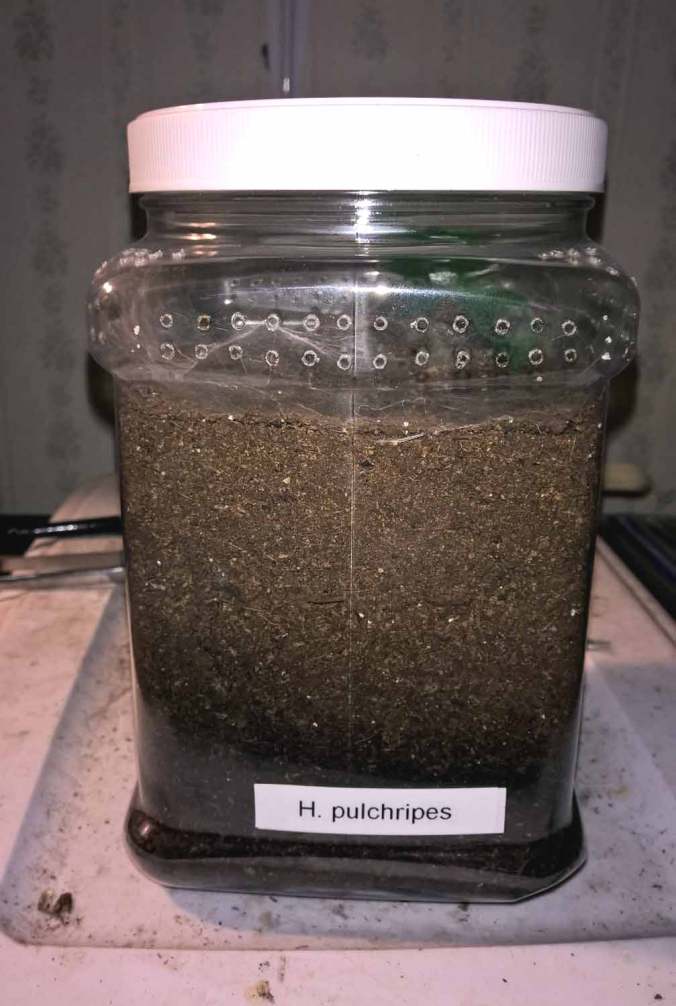 For substrate, I used a mostly-dry combination of peat and coco fiber. After packing this down in the enclosures, I packed some dry substrate on the top. Both were offered cork bark with some plastic leaves for a hide, and I used my finger to pre-start a burrow for each under the cork bark.

The juvenile has a milk cap for a water bowl, and I keep it filled with fresh water (although my girl has enjoyed filling it with dirt). The sling will be getting a water bottle cap for a dish soon. For the time being, I use a water dropper to add some moisture to the plastic plant and webbing in case it wants a drink.

Both specimens took to their burrows the first night, and they have spent several weeks burrowing a bit and webbing up around the entrances. Although each has constructed a fairly deep burrow in the substrate, they are both out and visible quite often (the sling does move to one of its holes whenever I disturb its enclosure).

A beauty with a voracious appetite

Both of my pulchripes have been great eaters. I drop a cricket in overnight, and it’s always gone in the morning. When I first got my sling, I didn’t have a cricket small enough for it as I was expecting a 2.5″ juvenile. Therefore, I dropped in a pre-killed cricket for it to scavenge feed on. When I checked in the morning, the sling had dragged the carcass beneath the cork bark and had devoured the entire thing. On average, I feed this specimen three times a week. While the weather is warm, I’ll be taking advantage of its higher metabolism to grow it out of the more fragile sling stage faster.

The juvenile has had no trouble taking down medium-sized crickets; I just drop them in at night, and they’re gone in the morning. She has currently sealed herself up in her burrow for premolt, so I’m eagerly awaiting the impending shed. Before she stopped eating, I was feeding her on a twice a week schedule.

Like most of my baboons, the H. pulchripes  don’t get as fat in the booty as some of my New World terrestrial Ts get when they are about to molt. Despite powering down several crickets, their abdomens never seem to get overly plump.

As I acquired these guys in the summer, temps in my tarantula room have been between high 70s to low 80s. I’m assuming that when the winter comes and temps are in the low to mid 70s, their metabolisms will slow down a bit and molts will come more infrequently.

Not as high-strung as most baboons

So far, both H. pulchripes have been relatively calm when compared to other “baboon” species of tarantulas I keep. The female in particular is fairly low-key, staying out in the open most days and calmly seeking shelter if I disturb her enclosure. The sling is a bit more skittish, but so far she is nowhere near as flighty as my M. balfouri, C. darlingi, or my P. murinus juveniles.

This doesn’t mean that I let my guard down with these spiders as I’ve seen their speed and know what they are capable of. The H. pulchripes is a lightening-fast Old World species capable of delivering a very painful, possibly debilitating bite. Also, tarantulas often change disposition after a molt, so I know that the next shed could bring different or more extreme behaviors. Caution and care always need to be exercised with Old Worlds species.

But, is it worth it?

There’s really no denying that the H. pulchripes is a striking tarantula, but is it really worth the money? I guess the answer to this question would vary from keeper to keeper. Some folks who aren’t particularly enamored with the look of this animal would likely argue “no way.” Even many of those who find this species desirable would likely choose to wait until prices fall considerably before trying to procure one. For breeders who are looking to make an investment in an uncommon species, I would guess it would be an enthusiastic “YES.”

Personally, I love baboon species, and I was enamored with the color of this tarantula the first time I saw it. While researching it, I also learned that there wasn’t a lot of care information out there yet for this species, so I was enticed by the idea of possibly getting to blog about its husbandry for future keepers.  And I know I already have one female, so a breeding project will definitely be in the future… I’m quite pleased with my purchase, and I’m looking forward to growing these two to adulthood.