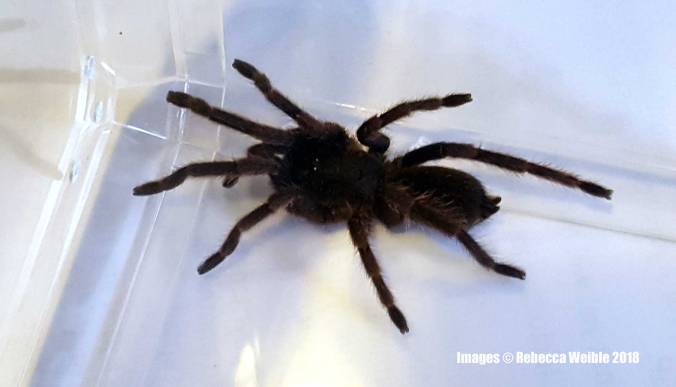 NOTE: Normally I wait until I’ve kept a species for a while before writing husbandry notes for it. As part of my write-ups, I like to discuss their behaviors as spiderlings, juveniles, and adults, as the fact that I’ve raised one to young adulthood hopefully indicates that my care notes are accurate. However, this species is still relatively obscure in the hobby, and those taking the chance on purchasing the pricey slings will likely find it difficult to find husbandry accounts for them. Keeping this in mind, I’ve decided to share my observations on this species so far. As this spider matures, I will continue to revisit its care.

Last year, I received one of these cool little fossorials from Fear Not Tarantulas, and I was immediately impressed by this shy little Old World. Unfortunately, being a rather obscure species in the hobby at the moment, C. hoggi husbandry information was rather scarce. After some research in which I didn’t find much from hobbyists keeping them, I went to the World Spider Catalog to read the species description paper. Here, I found information about the country and area it originates from as well as notes about how it lives in the wild. This allowed me to research the climate and weather of this area to get a better idea of how it should be kept in captivity.

From Fraser’s Hill in West Malaysia, this fossorial (burrowing) species is found in higher altitudes with cooler temps ranging from 63 to 77 F (17 to 25 C). As such, this is definitely a spider that will do quite fine when temps dip into the lower ranges of “room temperature.” No need for extra heat with this spider. I currently keep mine on one of my lower shelves where temperatures average 72 degrees or so. In the summer, my temps rarely rise to 80 in my tarantula room, so I won’t have to worry about temps becoming too hot for it.

An obligate burrower, the C. hoggi can be found in dens it constructs in steep, sloped ground and hillsides. Its habitat is constantly moist due to rain and misting from cloud cover, so attention should be paid to moisture levels in the enclosure. In the wild, the soil is moist and clay-like, so it’s important to mimic this by using damp soil in captivity. 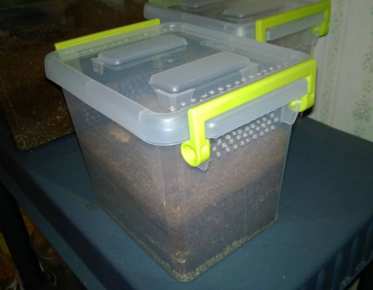 Upon receiving mine, I found that it was closer to juvenile size at about 1.5”. I therefore skipped over the 32-oz deli cups I often use for fossorial slings and used a 6” x 4.5” x 6” Sterilite container. This allowed some depth for burrowing as well as some floor space for movement. For substrate, I use a mix of moist topsoil and vermiculite, and I keep part of it damp at all times. Moist coco fiber, peat, or Lugarti tarantula substrate would also work. A small water dish (a water bottle cap works great) should also be included.

Although this is a burrowing species and specimens will likely create their own dens given the time, I like to start all of my fossorials with a cork bark hide with a starter burrow beneath it.  This gives them a place to hide immediately while they acclimate to their new homes. Mine adapted to the burrow quickly, webbing up the entrance and using this as the epicenter of its excavations. It then dug a tunnel straight down the corner and along one entire edge of the cage. They appear to be quite the diggers.

This is a more of a shy than defensive species that rarely ventures out of its burrow. Those wanting to catch it out will find that their best opportunity will be after the lights go off for the night (or in the early morning before the lights go on). When I first got mine, I would feed it one small cricket twice a week. After its most recent molt, I now give it one medium cricket or red runner roach once a week. During this time, I make sure the substrate is moistened, fill the water dish if needed, and remove any boluses. 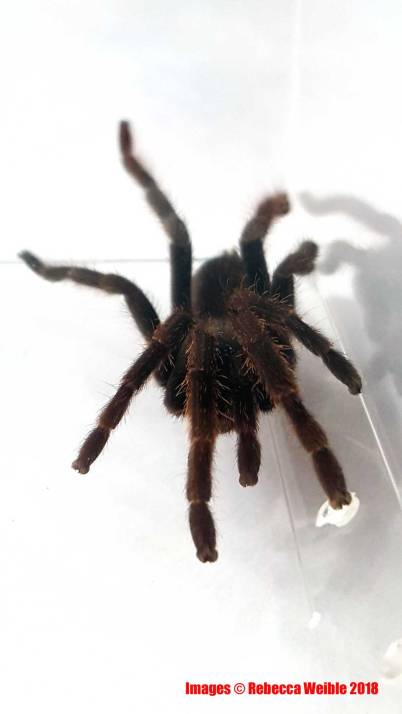 I’ve observed that this tarantula will often block up the entrance of its enclosure with webbing even when not in promolt. I suspect that this might be something it does in the wild to keep water from getting into its burrow. Keeping that in mind, continue to try it with food even if it seems to be hiding. DO NOT open the burrow, but drop a cricket in overnight and check to see if it’s gone in the morning. If you can’t find the cricket, assume that it’s still eating. If the cricket is still there, it may be in premolt.

So far, this species seems to grow at a medium pace. Since receiving mine in September of 2017, it has molted twice and put on a fair bit of size with each shed. I’m very interested in growing mine up to adulthood, and I’ll be keeping my fingers crossed that I have a female.

Although a little extra attention to moisture levels is definitely warranted, so far mine has proven to be a hardy, relatively-fast growing spider. Interested in this species? Be sure to check them out at Fear Not Tarantulas.